And a little child shall lead them

I have found myself regularly recalling and admiring one episode from James’ earlier life that it seemed time to write it into the record. James was 4 years old and we were at a large family holiday gathering. After an hour of playing for the kids, the family assembled in the den to receive instructions. The kids obviously weren’t overjoyed by this interruption in their play, but were waiting patiently for the end of the instructions. When it was finished, an announcement was made that the kids could continue their playing. James, who was closest to the stairs, turns and says, “Come on kids! Let’s go play!”  The other young cousins ranging in ages around 8 to 13 fall in line and follow him up those steps. I saw no sign that any of them were thinking or saying, “Who is this little pipsqueak taking charge and telling us what to do?” They just followed the overseer of fun up the steps.

You’re free to credit James’ character and personality to anything that pleases you, but I find that one contributing factor is that he is not being raised in a herd (and thus developing the herd mentality.)  I do not mean that he lacks siblings (let the reader understand.)

Since that time, we’ve seen James being self-conscious and intimidated occasionally. But we’ve also seen him overcome in the situation. For example, he was determined to make friends in the new neighborhood. I saw the nervousness in him and I saw him go out there and say, “Hey! Can we talk? I’d like to be friends.”  I heard on the first attempt one of the kids saying, “Come on, let’s go home.” My heart hurt for my boy. I thought, ‘How rude.’ James was disappointed, but only minutes later the kids returned and James went out and repeated the offer and came back in the house saying, “I did it! I made friends. They want me to ride bikes with them. Can I go?”

James leads me in so many ways. His boldness and honesty most likely exist because they are natural and because they have not been trained out of him.  My timidity, on the other hand, is most likely unnatural and the result of training. I want to grow up to be like him. 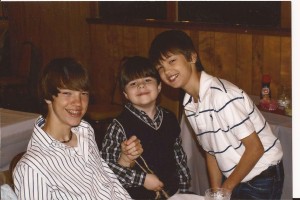 James and some big cousins

This entry was posted in Character, Parenting and tagged character, play, self-reliance. Bookmark the permalink.