We visited this cave which included an underground lake earlier this month. As soon as we entered, James kept saying, “This is cool. This is so cool.” (and he didn’t mean the temp which was about 57 degrees) We learned a few interesting things along the way, one of which was that Confederate soldiers had mined the cave for saltpeter to make gunpowder. “Indian” artifacts had been found in there. I took one picture thinking it was genuine writing on the wall from centuries ago, only to find out it was graffiti from the 1990’s 🙂 It would be nice to go on such a tour and be able to ask tons of questions. I knew it wasn’t going to be the kind of tour our family likes when the guide says after the first stop where he had explained some feature, “Any questions? No? Good. This is the kind of tour group I like.” Later he referred to “commercial tours” and I wondered if there was such a thing as a non-commercial tour that we could join. Our guide was full of jokes and one-liners and it occurred to me that most people (at least those in this group of 50 or so) were really interested in saying ooh and awe and being entertained.

Here is my Caveboy 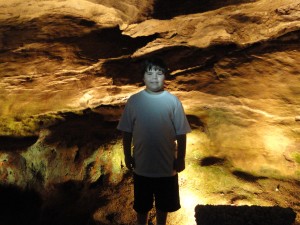 [To follow here will be pictures I took on the tour of the caverns and on our boatride on the lake. Captions to be provided by the head of our Science Dept. at Pelham House.]

This entry was posted in Nature. Bookmark the permalink.