Before I continue with the beautiful and glowing reports of our History, Geography, Literature readings and Art and Music studies as promised in the last post, I’m going to share the hardest battle we’ve have this school term. (Funny that one might call it the “fall term” and autumn just began today.) Math, math, math. Multiplication facts! Argh!

When James was around 2 or 3 he was recognizing shapes and their names and did great with patterns and sequences. I thought I had a math genius on my hands and that he had inherited Uncle Mike’s gift. We started the 1st level of formal math when he was 5. Math-U-See is the curriculum we use and their Alpha book might be considered 1st grade level.  James did pretty well with this. We enjoy the DVDs and letting Mr. Demme teach us each new lesson and concept. We worked slowly through the book and finished it in a year and a half. This put James at 6 months ahead of his “grade level.” I was cool with that. The walls we hit at that time were understanding the -teens and -tys. Have you ever noticed that every other series of numbers above 10 have names that read from left to right, but no, not those teens. If it’s forty-one and seventy-six, why can’t it be onety-three and onety-seven? We spent a lot of time with flashcards trying to help James understand these numbers. Jack had him outside marching around the house and counting each step so that he could see that there’s a big difference between 16 and 61.

Then we made it through the Beta level in one year. So we were still on that 6 month ahead schedule. In January of this year, when James would be considered to be halfway through 2nd grade, we began Gamma. Now we were into multiplication. He was enjoying this and even told me that multiplication was easier than adding. Wonderful. This was going to be a breeze. But then something happened. A wall constructed itself in his mind. By the end of the school year we were halfway through the book (on schedule), but mostly that was because I was keeping it that way. Math-U-See is a “mastery approach” as opposed to a “spiral approach.” You do review concepts, but you are not to move on until mastery of the current concept happens. When we started back last month,  I had to come to terms with the fact that I had allowed James to move on to each successive lesson and he had not mastered the previous set of multiplication facts. My big struggle was to be able to just stop the presses. Stop being so anal about keeping with the schedule. I had to be okay with the fact that we might not even get back into the current level for several months. And I had to come to terms with the fact that it might be my own insistence on keeping on schedule and pushing James that had caused him to put this wall up in his mind.

So I put the lessons on hold and tried to come up with a plan to learn and master all the facts that what we should have learned at that point. I looked at several websites and watched videos of different tricks to learn math facts. I kept switching from one method or trick or song to another to try to find something that worked. This was not making matters any better. Jack said that if there is anything that school did right for him it was making the class recite the multiplication facts. He said he remembers them to this day because of that. I decided that once more I had to pull in the reins on my anxiety and just do one thing and that would be the one thing that Jack suggested. Good old fashioned writing the tables up on the wall and reciting them. So we did. (We still sneaked in the Schoolhouse Rock “Three is a Magic Number” song.)

I’m happy to report that the Wall seems to have come down. James is having fun once again with numbers. He doesn’t enjoy having to do a worksheet. He prefers word problems over just filling in the solution to an equation already written out. James enjoys the hunt. This was one reason we were having problems. It’s just not fun to memorize a fact. He likes to go all around the world to figure out 4 x 3. Some of his processing is very interesting — believe me. Mostly we’ve had to convince him of the usefulness of just memorizing the facts and saving his brain exploring time for other things.

I think that the biggest challenge has been for me. I feel such pressure to keep with a schedule — whether it is one that I think others expect of us or one that I have made myself. I’m pretty insecure and I wig out when James isn’t performing up to snuff — math or narrating a reading or just plain being interested in what we’re learning. So I push and he just puts up a wall. It is so frustrating when I know full well it is there inside of him, but he delivers nothing. It feels like there is physically a partition inside his head and I just want to reach in there and bust it down. The fact that he is practically spitting out the facts now proves that they were in there. I just had to take a huge ol’ horse chill pill and everything miraculously appeared. It’s good to be right about something 🙂 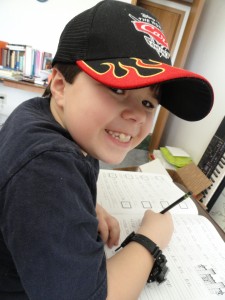 This entry was posted in Character, Home School, Math, Teaching. Bookmark the permalink.