When I was in 2nd grade, my Sunday school teacher, Mrs. Romberger awarded me a copy 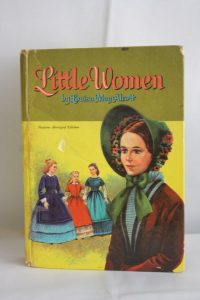 of Little Women for having memorized and recited Psalm 23. I read the book immediately, and then over and over during my childhood. I was fascinated by the connection to the author’s real family, and so read biographies of LMA and her family. I have visited Orchard House, the Alcott home in Concord, MA three times. Even though in recent years I’ve been less involved with all things Alcott, that book and the history around it have remained near to my heart.

In the early 90s there was a movie adaptation of Little Women starring Winona Ryder as Jo, which I found to be a very good rendering — well cast, well told, well directed. But since that time, I’ve ignored any ensuing theater or television productions. So why I decided to give this new one a try, I don’t know. I don’t even like going out to the theater anymore. Maybe it’s because my husband likes Hermione. (Emma Watson plays Meg.)

So, we went on the day of its opening — Christmas Day.

Because I should probably tell you the good things first, I will tell you that we both agreed it was a beautiful production. I was particularly delighted that they got hair and dress appropriate for the period. The color and mood in general had the effect of the period and the March family’s living circumstances. The roles were cast well. I’ll save a couple of exceptions for later. The acting was for the most part perfect to me. One of the things that bothers me in modern productions (and a reason I avoid them) is that they tend to make the feelings, language, posturing of the characters be contemporary to us. That did not happen here. The Marches (and the real-life Alcotts) were very “progressive” in their ideas of race, women, education, etc. and this movie portrayed that well.

And as the story has always done, I cried all the way through.

But here’s what bothered me. And here be SPOILERS. But then, because of what they did, the movie itself was a spoiler. Confusing even this LW veteran, they started at nearly the end! I’m serious – I nearly came out of my seat at one point and wanted to scream …at the screen, the projector, the universe. But I was a good little woman and stayed seated. The opening scenes give us a glimpse of all 4 March sisters (in their separate locations) at this later stage in the story, and then appears on the screen “7 Years Earlier”, and we are taken back to Orchard House (but still not the opening scene of the book). The movie continues to move back and forth in time with no further screen words to tell us when or where we are. Again, this LW veteran had to work it to figure out where in time it was. My poor husband was lost, but still enjoying the beautiful production. I was frustrated that I couldn’t explain things to him in the crowded theater. I felt a wee bit of outrage at what they were doing to my beloved story, even though each scene was acted and directed so truthfully. It was this whole arrangement of back and forth in time. I was put out that….here be SPOILERS again, but like I said, the movie did it…..we know that Jo rejected Laurie even before we meet Laurie in the “7 years before”, that Meg marries Mr. Brooke even before we meet him in the “7 years before”, that Beth is very sick and….SPOILER doesn’t make it to the end of the story.

Through it all my clueless-to-the-March/Alcotts husband enjoyed a beautiful production, but at the end was unclear just how many March sisters there were, and that the old gentleman next door was not *their* grandfather. Does this matter? We both agreed that the movie was written for those that already know the story, and I came out of the movie knowing I was going to tell everyone just that and never recommend it to someone who did not already know about Meg, Jo, Beth, and Amy and how they grew. But maybe it’s okay to pay your $15 and just enjoy a beautiful but confusing production. I don’t own the story, after all.

Just be careful, it’s my heart.