I best get on with this 6 week review now that we’ve finished our 8th week of school. I’ll begin with our journeys through British, American and World History. This is our third year reading Our Island Story by H.E. Marshall.  (Yay, Kara Shallenberg!) At the end of our 2nd year, Henry Tudor had finally put an end to that nasty ol’ War of the Roses. In these 6 weeks we’ve read about the antics of jolly ol’ Henry VIII “Defender of the Faith.” Wonder what the Pope thought about giving Henry that title after Henry skedaddled out from under the Pope’s control so that he could be rid of Katherine and get Anne of a 1000 days? We read about the poor boy King Edward and the very, very sad fate of innocent Lady Jane Grey. Currently in our story Mary is being bloody and Elizabeth is under guard. For World History we have read about the exploring and conquistadoring of da Gama and Pizarro and the exit from the middle and oh so dark ages into the bright new day of the Renaissance. We are reading another book by H.E. Marshall titled This Country of Ours to learn the stories of…well, this country of ours. Last year we read about Leif and the Vikings and Columbus’ discoveries. This year we’ve been reading about the French and Spanish fighting over Florida. The French are Hugenots and it is not good news for them when the Spaniards show up and ask, “Be ye Catholic or Lutheran?” That Menendez fellow  is firmly convinced that he is on a mission from the King and God Almighty. Gotta convert the savages to the true faith and rid the world of the heretic protestors. In one of these books we read about how the Pope decided to divide the new world between Spain and Portugal; so when the French —- especially heretical Frenchman — are nosing in on their property, justice must be served. It’s just amazing to me how the Pope could even think he had the right to do this. Does he own the planet? And there is no consideration that there was already human beings populating the area. Crazy, arrogant stuff.

Our other history readings include the Bible where we’ve been reading about the last kings of Israel and Judah and the prophets that tried to warn them about their bad behavior and the Assyrians and Babylonians who took care of taking them away from the promised land. Some of those prophets promise that some will return and restore things. Ezekiel saw dem dry bones. We also took up this year a book of “church history” called Trial and Triumph. This book is suggested for Years 1 and 2 at the Ambleside site, but I had opted to opt out since our beliefs don’t fall in line with a lot of the stories there. This year’s readings take up with Martin Luther and I decided to add the book to our readings since I think James needs to be familiar with who and what teachings our various and sundry Christian friends follow. It’s obvious from the stories we’ve read so far that the author is prejudiced toward his personal views (in such things as praising a particular person and actions, for example), but so are the authors of the other history books that we’ve read. As it’s rather hard to write and not insert your own feelings and commentary, we learned to deal with it and consider the information and do our own musing and interpreting and analyzing and such.

We read one biography each term and are currently enjoying the life and times and ideas and talents and ADD of Leonardo da Vinci. James is quite taken with the ADD aspect of Leonardo’s character and often finds opportunity to call himself Leonardo when he flits from one activity and interest to another — leaving a trail of toys and papers and gadgets behind him. My son is a genius!

For Geography this year we are traveling with Marco Polo from Venice to Cathay and back. We are reading this book and this book and keeping track of where MP and dad and uncle are on their trip. We also take note of the terrain and climate and people and smells and such of each place. At this point in the story we have finally left Venice, after the delay of naming a new Pope so he could send 100 experts in their religion back with the Polos per the request of Kublai Khan — but he ends up sending only a few monks who end up chickening out soon into the trip and turning back, telling the Polos if those heatherns want to know about Christ, let them come to Rome — and have been to Turkey and Armenia and Persia and are into Afghanistan. We’ve been through some dry land and some high land. We learned about the first “assassins” and the origin of the name — and so James has learned about the drug hashish. (If you don’t talk to your kids about drugs, who will? )

Next installment of this thrilling review I’ll share our Art and Music studies. Oh, and we’ve also been spreching Deutsch.

This blogging thing takes a lot of one’s time and I don’t know what it is, but I feel that someone is seriously needing some attention. So until next time… 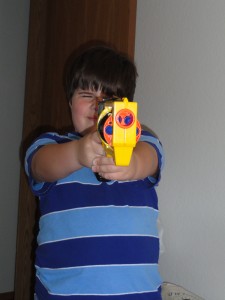