Lessons of Integrity from Fathers

For many years my two favorite literary dads have been Atticus Finch and Pa Ingalls. This year I was introduced to Charlie Moody in his son Ralph’s memoir titled Little Britches. I loved just about everything about this man as remembered by his son, and have found someone to place up there with Mr. Finch and Mr. Ingalls. Here is an excerpt from Little Britches: 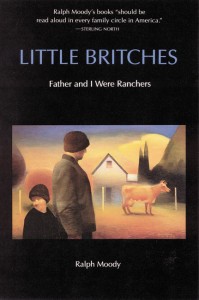 While we were milking that night, I told Father what Lucy said about her father, and asked him why he didn’t try to do the same thing.

I only saw Father mad two or three times, but that was one of them. He jumped up off his milking stool and came around behind Brindle. His face was gray-white—even his lips were white—and his voice was shaky when he said, “Don’t you ever talk to that girl again.”

He just stood there for a minute, as if he didn’t know what he was going to say, then he put the stool right down in front of me and sat on it. He reached out and took hold of my knee hard. His voice didn’t shake then, but he talked low. “Son,” he said, “I had hoped you wouldn’t run into anything like this till you were older, but maybe it’s just as well. There are only two kinds of men in this world: Honest men and dishonest men. There are black men and white men and yellow men and red men, but nothing counts except whether they’re honest men or dishonest men.

“Any man who says the world owes him a living is dishonest. The same God that made you and me made this earth. And He planned it so that it would yield every single thing that the people on it need. But He was careful to plan it so that it would only yield up its wealth in exchange for the labor of man. Any man who tries to share in that wealth without contributing the work of his brain or his hands is dishonest.

“Son, this is a long sermon for a boy of your age, but I want so much for you to be an honest man that I had to explain it to you.”

I wish I knew how Father was able to say things so as to make you remember every word of it. If I could remember everything the way I remember the things Father told me, maybe I could be as smart a man as he was.

This entry was posted in Character, Parenting and tagged character, honesty, integrity. Bookmark the permalink.