In pondering more about the Boston Tea Party this morning, I got to thinking about “the glory” in knowing that our eventual independence, acquired some nine (end of war) or eleven (signing of the Treaty) years  later, came about because we won the War by the surrendering of the other side.  The rightness and justice of our cause was not what brought the achievement of that goal, but that we were physically stronger in some way.

I wonder at the fact that we were in the “Age of Enlightenment,” and not some barbaric times of Attila or Genghis, but that it was not reason that brought us to freedom and nationhood, but rather physical brutality. How glorious really is that? How satisfying is it to know that someone set you free, not because they were convinced it was the right thing to do and they wanted to do the right thing, but because you bullied them into it?

I realize that there were efforts to reason with king and country, but I’m just wondering where is the glory and joy and pride in what was resorted to for the eventual liberty?

Why do we celebrate the acts of violence and destruction?

When the South declared their own independence, charging much the same economic oppression and tyranny of which the colonies had accused the King, the immediate response was physical violence. This is the way we decide rightness, it seems. The “winner,” the biggest baddest strongest decides what is right.

Where is the glory in this?

And so it continues today. 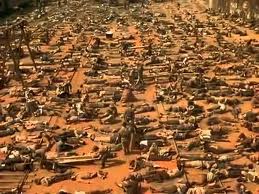 This entry was posted in Uncategorized and tagged corruption, justice, rightness, truth, war. Bookmark the permalink.