I’m Not Sorry About My Dad

I have had this post going on in my head since October, 2015. That’s when my Dad died. My Dad had many people who thought well of him and many, many who came to the visitations at the funeral home and the funeral at the church. So many times these good people greeted me with, “I’m sorry about your Dad.” I don’t wish to belittle these people or the sentiment they were expressing or their traditional way of offering sympathy; I know that these people sincerely liked my Dad. He was a good man. A very good man.

But just about every time it was said to me, it struck me as so odd for a few reasons, and I wanted to say back, “I’m not sorry about my Dad.”

I’m not sorry about my Dad. My dad was born December, 1917. He almost made it to his 98th birthday. When is death a tragedy? Certainly not at 97. Death is inevitable, and most of the healthiest don’t make it past their 80s. My Dad was given nearly 98 years here. His granddaughter Grace got 3 weeks, some of his other grandchildren were miscarried. His youngest child died of cancer at 31. Of dad’s 10 siblings, 2 were still-born; one sister died at 14, two brothers in their 40s, two brothers in their 60s, one sister at 79, another sister at 88. One brother survived Dad, and he passed recently at 84. Dad’s dad made it to 73, and his mother was 83 at her death. Dad got nearly 98 years here. What is to be sorry about that? 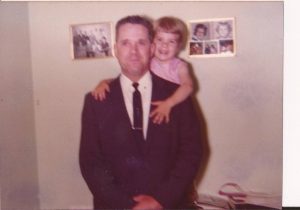 I’m not sorry about my Dad. I was born a week before his 44th birthday. Growing up, I use to imagine that he would have to take me down the aisle in a wheelchair, he was so much older than my same-age peers’ dads. And that’s when I thought I’d be married in my 20s. He was still here and doing well when I married at age 40. Very well. He ran me down the aisle. What is to be sorry about that?

I’m not sorry about my Dad. Perhaps part of the reason that I married relatively late (besides the fact that I didn’t meet Jack Pelham until I was 36) was the values that were instilled in me by my dad — by his words and his example. I am constantly astonished by the ways that men (and it is not just in these times, as so many go on about; I saw it in the past, too) do not protect their daughters. And every time I witness something or read another story, I thank God for my Dad. My Dad taught me to value myself and my appearance. I’m confident I was saved from a lot of abuse and emotional turmoil from which many women suffer because of my Dad. What is to be sorry about that?  [I don’t mean to disparage marriage at a young age; many marry young and do very well for many, many years — my oldest sister, my nieces, several cousins, and friends have done this. And there are also many that marry young for the wrong reasons and endure years of ugliness, or end up in divorce and maybe marry yet again. I don’t really know why the ship was passing me by for 20 years, except, as I said above, Jack hadn’t sailed by yet, but I do think there is something in the values instilled in me by my Dad. I wasn’t so desperate for a partner that I would settle for less than a man who would value me as my Dad had. I didn’t totally love my singleness, but I also wasn’t helpless to survive alone in this world emotionally, financially, and physically. Do I need to say more to keep myself out of trouble over this?]

I’m not sorry about my Dad. He was a musician who traveled around the region with his band. When he married at age 32, he decided that that was all behind him. He was responsible for a family now. His teen-age bride (Mom was 17) followed him from Tennessee to Illinois where he felt there was steady work for him, and where they stayed for over 30 years. My Dad was uber-responsible. He wouldn’t return to the south until their house sold 5 years after his retirement. When they did return in 1987, he built a house on Mom’s family’s farm (on land which he purchased from them), purchased his and Mom’s funeral and burial plans, and kept his bills paid on time (or before time) and his yard mowed until he just couldn’t get out there anymore some time in his 90s. Dad got to visit his own tombstone for about 30 years. He buried his son and granddaughter next to him. In my growing up years in Illinois I never felt insecure about having or not having things. I did feel a little different from other kids with my peanut butter and syrup sandwiches for school lunch and corn bread and beans for supper, but I thought that was because my parents were country, not because we were poor. My Dad, on his one factory income, made sure all our needs were met. Some years ago in my frustration with roommates that wouldn’t help keep household supplies stocked, I mentioned to my Mom that I never remember running out of toilet paper when I lived with them. She reported that once they did, and my Dad was so mortified because they had guests that he made sure that never happened again. (That might seem like a comically small thing, but then you don’t know what the security of having a toilet paper roll — turned the right way!— means to a girl.)  My Dad, living on the pension from his factory job, was able to write me a large check when I was well out of his house (and responsibility) to pay off my embarrassingly large credit card debt. You don’t know how ashamed I was to have accrued that debt, having a Dad like him, but he in no way made me feel bad; he hated debt and loved me. What is to be sorry about that? 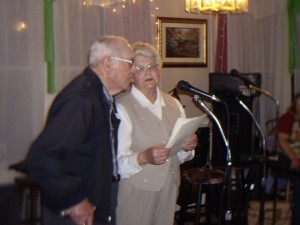 I’m not sorry about my Dad. He loved my Mom. What a chance he took marrying a 17 year old girl, but he definitely picked right. He was faithful unto death, for sure. I was about to type, “My Dad was oblivious to other women” (and I will tell you more about that later), but then I thought about times he did say good and bad things about other women. He had an ability to acknowledge the good looks of a woman and not be lusty about it. (I’m struggling to explain that.) My Dad was pretty much a truth-teller about anything without any ulterior motive, which did occasionally border on lack of tact. Okay, now about that ‘oblivious’ thing. My Mom was very confident in Dad’s faithfulness, which, of course, she had reason to be. So the story is that once Dad and his friend Harley Webb, in their capacity as elders in our local church, were visiting with a family . The daughter-in-law of the couple they were visiting was in some way flirting with these elders of the church, according to the report by Mr. Webb. My Dad said, ‘Really?’ My Mom said, ‘Oh, he wouldn’t know if a woman was flirting with him if she was dancing in front of him naked.’ Now, maybe you wouldn’t want to have a stupid Dad like that, but my junior-high self heard that story and I was welled up with love for my Dad. I sit here today, 40+ years later, still filled with gratitude for his obliviousness in that area. It is possible for a man to love only one woman and be faithful unto death. My Dad taught me this. What is to be sorry about that?

I’m not sorry about my Dad. The leader of the band is gone, but his blood runs through my instrument, and his song is in my soul. I am a living legacy to the leader of the band. My Dad didn’t play his guitar much during my life at home. But he sang. Nearly all day long. And he yodeled. “Yodel for us, Tennessee,” the men at the factory would say to him. He sang at home. He sang at work. He sang at church. He led singing at church, even though he never could get the hang of the right kind of conducting patterns. He sang the lead. He sang harmony. He sang tenor, and he sang bass. I came home from school near the end of 2nd grade, telling my parents that I wanted to take piano lessons. I hadn’t a clue that the older 3 had been denied instrument lessons (or being in band) due to lack of funds. Okay, I’m crying right now because this always gets me. Why did they say Yes to me? Oh, my goodness, where would I be now without my years of piano lessons, and studying piano in college, and getting those degrees, and now teaching music to others? My Dad paid for weekly lessons for 10 years — no summer breaks for me, and then helped me financially through 4.5 years of undergraduate and then 2 years of graduate school.  My Dad gave me the gift of music in so many ways. I think in his own life, financial security won over artistic endeavors, but he allowed me the freedom and supported me in pursuing art. What is to be sorry about that?

My Dad was far from perfect. I could also list ways that I wish he had been different. I wish he hadn’t had so many fears. I wish he hadn’t felt insecure around others who were more educated. I wish he would have pursued a career in the cyphering that he loved so much. Maybe he could have used a little more ambition and accepted those foreman job offers. And now I’m thinking about other good things that I haven’t told you about him — about how he went across the ocean to serve in WWII, expecting to die over there; the responsibilities he was given over there because he was….responsible; responsibilities that years later he still couldn’t believe they gave an 8th grade graduate farm boy from the hills of Tennessee.  So as I attempted to think of a few weaknesses, good things came flooding back to me. That’s what happens when you had a very good Dad. I am so not sorry about my Dad.