Thoughts on Empathy and the Education of James Pelham

What is it I want to say about Empathy? So many things are running through my mind that I want to share with you, but mostly it is that I want you to understand that that is the end-goal of my part in the education of James Pelham. All that my son learns with literature, history, science, math, languages, music and art must ultimately lead to a kind human being that works with all his heart to make his world a better place. For me it is the purpose for all the stories and events that we read about. The study of science and numbers should lead to an awe that is very humbling. Charlotte Mason speaks of the three sorts of knowledge proper to a child as Knowledge of God, Knowledge of Man, Knowledge of the Universe. The results of this knowledge should be empathy and humility, not a great load of facts to pass tests and win scholarships and trivia contests.

As I plan our coming school year using AmblesideOnline’s Year 11, I am revisiting this idea of our purpose for all that we do with books and activities. I have been strongly reminded of it by my experience at AO’s Camp Meeting in April, especially Wendi Capehart’s talk, as well as ongoing webinars,  discussions, and podcasts featuring Angelina Stanford and Cindy Rollins this spring and summer. As my friends make their plans for the school year, choosing books and planning lessons, I remind them that it is ultimately about empathy in the hearts of our children. That’s what those history, literature, geography, science lessons are for. That’s why narration is so important. That he makes a connection to the stories. That she is compelled to step inside someone else’s shoes for a moment. That he learns that it is not all about him. That she will not be timid when meeting someone unlike herself. That he will not think more highly of himself than he ought. That she will consider the repercussions of her actions on the world around her — family, friends, co-workers, anyone she meets along the way. That he will love his neighbor as himself. That she will do to others as she would have them do to her. That he will realize that not everything is as easy for others as it is for him. That she will be patient with others. That they will care.

So how do we bring this about? As my friend Angelina said recently, when references were 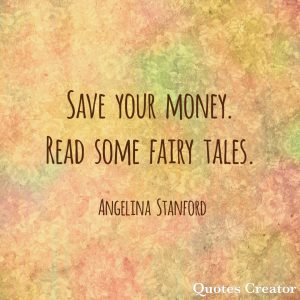 made to books on behavior management, “Save your money. Read some fairy tales.” Wendi Capehart warned us at the AO Camp Meeting to stay away from heavy-handed books, as well as twaddly stories, because neither will help to develop the moral imagination, nor encourage you to put yourself in someone else’s shoes, but rather they tend to make their readers judgey. And cynicism too young makes for an arrogant human being.

Stories will save the world, Angelina says over and over. Good stories. Well-written, not heavy-handed nor twaddly. People often steer away from fiction, thinking that the answer is in non-fiction character-building textbooks. How sad, for it is in great works of fiction that the gold is really found. The fairy tales and the stories of mythology. Even in fantasy stories we see the truth of human relationships. Maybe the unreal stories work best because they take us away from the material and familiar trappings around us and reveal who people really are. It’s not about the stuff.

And then you allow children the time to play. To work with their imagination and these ideas. Wendi also suggested that we get rid of toys. Don’t accessorize their play. Don’t rob them of time to imagine and create their own. No talky-talky from the teacher, Charlotte Mason says. (Oh, yes, indeedy, she uses those words. See p. 52 of Vol. 6).Don’t explain every detail of a story and push the moral on him. Give him freedom to ponder and make connections and get the ideas in his heart.  Allow her time to be moved by the events in a story.

I could go on about the How, but all of that doesn’t matter if you are not convinced of the 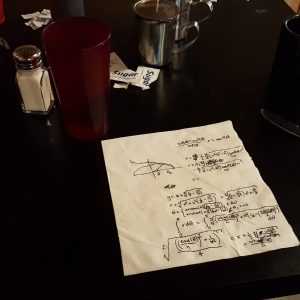 Always figuring. Restaurant napkins left like this all over town. Grandpa would be proud.

Why. My heart breaks when I see the textbook crap my fellow home-educators buy, and when they worry over scores and competing in the STEM world. My son is an amazing mathematician, has numbers running around in his head all day long, probably waking and sleeping. But none of that matters if he is not a decent human being. If he does not have empathy for those unlike him. If he will not reach out to someone in need right before his eyes. If he will not respond respectfully to authority. If he thinks more highly of himself than he ought. If he doesn’t care.

The question is not,––how much does the youth know? when he has finished his education––but how much does he care? and about how many orders of things does he care? In fact, how large is the room in which he finds his feet set? and, therefore, how full is the life he has before him? ~Charlotte Mason

So much more to say. Sorry for this jumbly mess. I had to make myself write today. Hopefully better next time. Stay tuned.