History and Political Games: A Glimpse into the Education of James Pelham

On 30 January 1939 — the sixth anniversary of his coming to power — Hitler told the Reichstag that in order to feed its population, Germany would need Lebensraum — living space. He then called Czechoslovakia to reduce the size of its army, give him overall control of its foreign policy, and provide Germany with whatever raw materials it required. ~ Martin Gilbert, “A History of the Twentieth Century”

My son and I read this today bringing his first term of History to a close. For the past few 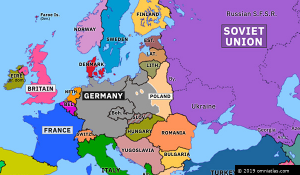 months he has been reading all about the goings on in Europe, as well as the rest of the world, as those nations are approaching a world conflict worse than the previous one that had ended 20 years before — you know, that War to end all Wars.

As I read aloud those words about Hitler claiming the need of Lebensraum for the people of Germany, I thought about how this idea of expansion of power and influence goes on right here in our own nation. And so I said aloud to my son. There are people — some in elected office, some being the “man behind the curtain” to whom we are not to “pay attention” — who may not be trying to add physical space to the US, but they are demanding and successfully extending their power and influence over areas within this nation in which they legally have no authority. One way that comes to mind is, whereas we are constitutionally a group of sovereign states, some act as if (as so deceive many) that those sovereign lines don’t exist. It is exactly what came to mind when I read about Hitler telling Czechoslovakia just how it was going to be. They are not satisfied with their current realm of power and influence — again, I am thinking of both leaders in business and politics — but want more. Power over our way of living and thinking.

Then my son began to talk about how these people are able to manipulate and work around and against the Law in order to fulfill their purposes. What follows are his words (with a little bit of Mom editing for brevity. You’re welcome).

People take in their argument an axiom that they are correct. Everything they do is a circular argument because they’re saying I’m right because I’m right.

The game is split into two cycles, day and night.

During the day cycle, all players discuss who might be mafia.  If a player gets enough nominations, he must then attempt to reason why he is not mafia.  A vote is then taken, and if majority is reached, then the nominated player is lynched, and is out of the round.  Day cycle is then over.

During the night cycle, the moderator tells all the players to go to sleep (close their eyes), then wakes up all the special players (those with nightly abilities) in turn, and asks each which player to use his ability on.

During the day cycle I noticed that some players would start with “I know you’re innocent, and I’m innocent, so it must be one of them”, which assumes that “I’m innocent”, which you know, but no other player knows, and no other player will assume that, so it’s a bad argument.  For it to be a persuasive argument, you have to argue from the perspective of your listener, and not assume anything that they wouldn’t.  And for it to be a fair argument, you can’t assume anything not in evidence.

This is similar to Pelosi trying to say that the Founding Fathers did not anticipate that the President and the Senate could be corrupt at the same time, so thus we should just ignore the system and act like the articles of impeachment have gone through without sending them to the Senate first.  This assumes that the Senate is corrupt (and not the House), which is not shown to be in evidence.  It’s a bad argument anyway.  What’s the point of having rules, if you can just break them on a whim?  If the rules become wholly insufficient, then you either legally amend them, or it falls to the people to start over again.

And so you see how “there is nothing new under the sun” and how History and Current Events blend in the schooling of James Pelham. If you read through all the description of the Mafia game, God bless you. My son understands the Reality of rules of a game and rules of logic. In his 16 years, through reading History and through being aware of current events globally, nationally, and in his own social circles, he has come to recognize the good, bad, and ugly of human thinking and behavior. He is a mathematician and programmer who recognizes corruption in systems, both human and artificial.

What’s the point of having rules, if you can just break them on a whim? ~ James Pelham

It’s just not that hard to do the right thing. You just DO it.
~ Jack Pelham

A person can do nothing better than to eat and drink and find satisfaction in their own toil. This too, I see, is from the hand of God. ~ King Solomon

Give your servant therefore an understanding mind to govern your people, that I may discern between good and evil
~ King Solomon, when he could have asked anything of God

Jesus saw Nathanael coming to him, and saith of him, Behold an Israelite indeed, in whom is no guile!