This is installment two of remembrances of 10 years ago. Here is exciting installment one. On this day 10 years ago Jack had his first visit to my family’s farm about 70 miles from the big city. We drove out there with two other friends to spend a peaceful Saturday away from the hustle and bustle. On the drive over and up I learned some surprising things about my friend Jack. The subject of The Beverly Hillbillies came up and I was a bit embarrassed thinking that Jack was too high-brow to know The BHs. However, he was quite familiar with them, even knowing the minor character of Cousin Pearl! And then The Muppet Movie made it’s way into the conversation and Jack said it was one of his favorites and my heart went tippy-tippy because the movie holds special memories for me of my brother James who had passed away 3 years before this. I was learning that what I had thought was this high-falutin’ classical singing man was actually a normal guy. Although we had grown up in very different parts of the country, we had common memories.

At the farm we enjoyed visiting with family, singing with family, and then walking around the farm on a beautiful summer day. On the way down to the creek I impulsively reached down and picked a daisy and handed it to my friend and sang, “I’ll give you a daisy a day, dear.” And thus it has become known as our “daisy” day.

On the drive back to the urban jungle, Jack said he could see why family was special to me. He also commented  that he did not think I needed to “cut the apron strings” (as I had been told by people that thought I was too connected to my family), but that what I did need was my own apron. My friend had a vision that I would be married and have my own family. He just didn’t know it would be him —- yet.

Yesterday, on a long drive away from our current urban jungle, Jack took this picture of a field of daisies, not connecting that it was the 10th anniversary of our “daisy day.”  This particular area was covered with them. This was a very, very small portion. 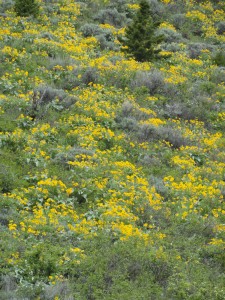 In case you’re not familiar with the song….

Sorry, I don’t have a picture of me in an apron, but in the spirit of what Jack meant that day, metaphorically speaking, here it is. 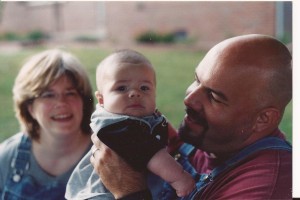