A Divinity Which Shapes Our Ends

“At the age of seventeen, Abbie must decide whether to marry Ed, and live a life of comfort, or Will, who offers a sod shanty on the Nebraska frontier.” 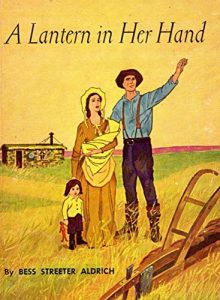 That’s the one sentence description at Goodreads for Bess Streeter Aldrich’s A Lantern in Her Hand. I’ll attempt to not give any spoilers as to which she chose, but either one could have led to hardships and disappointments, and this story is full of both of those. It also has hopeful and loving moments, but it takes some healthy thinking (not prone to dwell on and be overwhelmed by the sad things) to not be unaware of those.

It was a hard book for me to read as a mother and as a daughter. It was a hard book to read as a life-long dreamer of things I’ve wanted to do and be beyond “the normal”. There are some very sad deaths that occur in the story, but the over-arching story to me was of Abbie’s constant (at least it felt like it to me) putting aside her own desires for artistic endeavors in order to take care of her family and their needs. There were times when she was so close, and just like George Bailey in It’s a Wonderful Life, something would happen to block that dream. But it was always ultimately Abbie’s decision, just as it was George Bailey’s. I still struggled with the unfairness of it all. Every year with George Bailey, too.

John Adams, one of America’s founding fathers and leaders in the ideas that led to the U.S. revolt and independence wrote in a letter to his wife, Abigail:

I must study politics and war, that our sons may have liberty to study mathematics and philosophy.

Our sons ought to study mathematics and philosophy, geography, natural history and naval architecture, navigation, commerce and agriculture in order to give their children a right to study painting, poetry, music, architecture, statuary, tapestry and porcelain.

I understand what John Adams was saying, and I see the good results of Abbie’s choices, as well as the many, many generational examples I’ve witnessed in my nearly six decades. But it still makes me sad. And I ponder over what becomes of the generations that don’t have to fight the battles. Do they really appreciate what they’ve been given by the sacrifical generation before? Must we continue in a cycle of War, Mathematics, Poetry, War, Mathematics, Poetry….? Or should each generation have real battles to fight? Could it be that we can have all three in one generation? How do we get Generations 2 and 3 in this cycle to stay grateful and ever alert?

Throughout the story, we are shown through her thoughts or spoken words moments of regret for Abbie, such as this statement in her 80th year:

But mostly Abbie appears to be resolved that though she gave up some dreams, it really was a wonderful and bountiful life after all. [And watch out, for here be potential spoilers.]

Grace was loath to accept the decision. “As I said, I’m sorry. You owe it to yourself, if you possibly can go. Your life has been so narrow, Mother . . . just here, all the time. You ought to get out now and see things.”

Unwittingly, as so often she did, Grace had hurt her Mother’s feelings. For a moment Abbie nursed her little hurt, and then she said quietly, “You know, Grace, it’s queer, but I don’t feel narrow. I feel broad. How can I explain it to you, so you would understand? I’ve seen everything . . . and I’ve hardly been away from this yard. I’ve seen cathedrals in the snow on the Lombardy poplars. I’ve seen the sun set behind the Alps over there when the clouds have been piled up on the edge of the prairie. I’ve seen the ocean billows in the rise and the fall of the prairie grass. I’ve seen history in the making . . . three ugly wars flare up and die down. I’ve sent a lover and two brothers to one, a son and son-in-law to another, and two grandsons to the other. I’ve seen the feeble beginnings of a raw state and the civilization that developed there, and I’ve been part of the beginning and part of the growth. I’ve married . . . and borne children and looked into the face of death. Is childbirth narrow, Grace? Or marriage? Or death? When you’ve experienced all those things, Grace, the spirit has traveled although the body has been confined. I think travel is a rare privilege and I’m glad you can have it. But not every one who stays at home is narrow and not every one who travels is broad. I think if you can understand humanity . . . can sympathize with every creature . . . can put yourself into the personality of every one . . . you’re not narrow . . . you’re broad.”

And this is why I mentioned earlier about a healthy mind that does not become overwhelmed by what was lost and therefore does not miss out on the bountiful blessings that they have experienced in this life. Life is short, as you probably know, and sometimes you have to decide what really has value in this life. Sometimes the hardest work in life is keeping on the sunny side.

Abbie took Lincoln, Omaha and Chicago papers, and with the same scissors that had cut out their homemade clothes, carefully cut out every item concerning her now rather well-known children. Sometimes she would run across one which gave her a few moments of almost wicked glee. One such was: “Perhaps more through the influence of Mackenzie Deal than any other single person, this series of Shakespearean plays is being brought to Omaha, . . .” For a few moments Abbie saw, in retrospect, a freckle-faced boy in a sod-house, hunching over a thick volume of plays and saying, “Aw, what’s the sense in this?” “Dear, dear,” she said to herself, “‘There is a divinity which shapes our ends, rough hew them how we will.’ ” 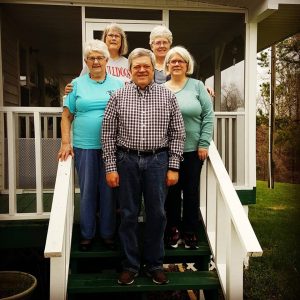 My mother and her story-teller, artist, music-maker, and mathematician. Missing is her 5th, another artist, who she lost in his 31st year. She worked hard so we could have the freedom to do what we have done.