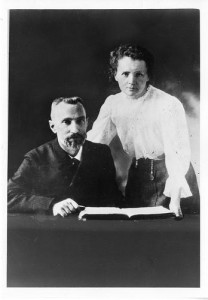 For a special bonus on the day after Love Day I will tell you about the chapter I read from Eve Curie’s bio of her mother Madame Curie. This chapter is about Marie’s discovery of radium. Though I tried hard to understand all the scientific details, the thing that I noticed the most was the relationship between Marie and Pierre Curie. And with the author being the daughter of this couple, how wonderful for her to have had such parents who genuinely loved and respected each other and to have decided that the chemistry between her parents was just as important to record as their discoveries in the lab.

As part of a doctoral study Marie had made the initial discovery of a substance, but now she needed help.

Pierre Curie had followed the rapid progress of his wife’s experiments with passionate interest. Without directly taking part in Marie’s work, he had frequently helped her by his remarks and advice. In view of the stupefying character of her results he did not hesitate to abandon his study..for the time being in order to join his efforts to hers in the search for the new substance. Thus when the immensity of a pressing task suggested and exacted collaboration, a great physicist was at Marie’s side – a physicist who was the companion of her life.

The available force was now doubled. Two brains, four hands, now sought the unknown element in the damp little workroom in the Rue Lhomond. From this moment onward it is impossible to distinguish each ones part in the work of the Curies.

Eve calls it a “superior alliance of man and woman.” From this point the couple signed nearly all their publications together. They would write “We found” and “We observed” and “one of us showed.” When it came time to give a name to one of the substances, Marie chose ‘polonium’ in honor of her native country. In a publication we read it as “from the name of the original country of one of us.”

Marie carried on her work after her husband’s death which to me is another sign of a very healthy love.

In Cicero’s discourse On Friendship it is said that Virtue is what both creates and preserves friendship. In this discourse friendship is also defined as “a complete accord on all subjects human and divine, joined with mutual good will and affection.” He goes on “What can be more delightful than to have some one to whom you can say everything with the same absolute confidence as to yourself? Is not prosperity robbed of half its value if you have no one to share you joy?”

This Friendship sounds very much like what Marie and Pierre Curie had in their marriage. How wonderful that a husband and wife are truly friends.

The Curies relationship and Marie’s ability to continue her work after her husband’s death remind me of what Cicero, through the character of Laelius, says in regard to grief over loss of your friend. “If I were to say that I am not affected by regret for Scipio…I should be telling a lie. Affected of course I am by the loss of a friend as I think there will never be again…But I stand in no need of medicine. I can find my own consolation, and it consists chiefly in my being free from the mistaken notion which generally causes pain at the departure of a friend.” He goes on to express a belief in immortality. He says also, even if there were no hereafter, there should be rejoicing that such a man was ever born. He was comforted and compelled to go on with his work in life because of “the pleasure I take in recalling our friendship, that I look upon my life as having been a happy one because I have spent it with Scipio…between us there was the most complete harmony in our taste, our pursuits, and our sentiments, which is the true secret of friendship.” He says that “I cherish a hope of the friendship of Scipio and Laelius being known to posterity.” The wonderful things and impact of a true friendship do not have to end with the death of ones friend. Madame Curie showed this. And with her relationship with Pierre “being know to posterity,” I hope that I may do the same.

This entry was posted in Character and tagged friendship, love, Marie and Pierre Curie, marriage. Bookmark the permalink.